Our Phase Two exploration program will test a porphyry target at our San Pablo Gold Project that was identified in our recently completed Titan Geophysical survey. We have budgeted 15,000 meters for this purpose.” Mr. Griffiths went on to say, “I am encouraged by the scope of opportunity that exists for Andean to grow organically in Bolivia. Exploration is a key element of this growth, complementing our San Bartolomé mine life Expansion Study and the continued extension of our government contracts.”

Twelve diamond drill holes were completed at San Pablo in 2021 for a total of 3,580 m, as reported in the press release of November 30, 2021. The highlight was an intersection of 53.8 m grading 1.17 g/t Au from 211 m depth in hole SP21-01. All twelve holes encountered anomalous gold throughout their lengths.

Quantec Geoscience subsequently carried out a 9-line, 20.3 line-kilometers, Titan 24 deep induced polarisation survey (“DCIP”) and magnetotelluric survey (“MT”) at San Pablo that was completed in December. On many lines the DCIP shows a thick, very conductive layer close to the surface that limits the depth of penetration. The magnetotelluric survey, which is a passive method that uses the earth’s natural electromagnetic field as the source field to image subsurface resistivity structure, achieved depths of investigation of about 1,200 m. The survey detected very low resistivity anomalies at depth that are interpreted to be altered porphyry intrusions. These will be tested in the forthcoming Phase Two drill program. The holes are being targeted on the basis of low resistivity, high chargeability which may be due to sulphides with associated gold, and geology. 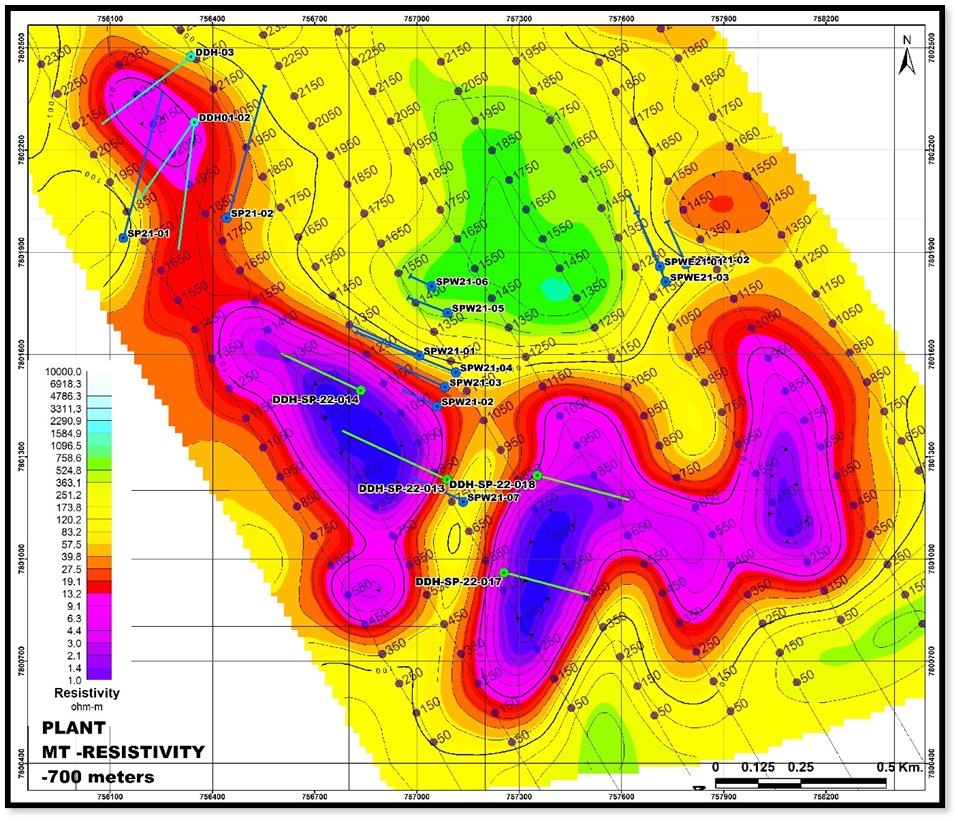