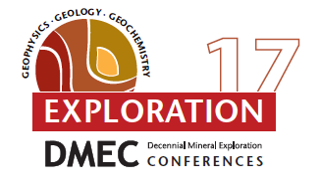 The Orion3D technology was first initiated in 2006 and trialed in 2007. The first commercial implementation was 2011.

There are several unique features of the system including a large footprint of 2 x 2 km to optimize DC and IP depth of investigation in the 500 m to 800 m depth range; and an ostensibly equal number of in-line and cross-line receiver dipoles that maximizes coupling with an target.

Survey results will be shown from a number of exploration situations globally including epithermal gold, IOCG and a copper-gold porphyry system. Case studies reveal the advantage, of true 3D vs 2D or 2.5D acquisition. True 3D is defined to mean acquisition where receiver electrodes sample the current in orthogonal directions and a large number of receivers (300) are deployed (using a DAS) to optimize the footprint geometry. For every current injection, all receivers are active. This results in a true omnidirectional coverage for each current injection and gives multiple intersecting current paths over the entire survey with a very large number data points acquired. The result is greater coupling with complicated 3D geology and structure which enhances resolution and target detection at both shallow and deep depths.  The omnidirectional coverage provides a better 3D inversion result because there is no acquisition directional bias and each cell in the inversion volume is sensitive to multiple omnidirectional current paths.

Examples which show this increased definition through a high correlation with drill results from actual field surveys will be discussed following a brief description of the technology.