TORONTO, ON / ACCESSWIRE / April 28, 2020 / Grid Metals Corp. (the “Company“) (TSXV:GRDM) is pleased to provide an update on the exploration program at its 100% owned East Bull Lake (“EBL”) palladium property (“the Property”) in Ontario. The exploration target at EBL is structurally-controlled, palladium-dominant mineralization with higher grades and greater thickness and continuity than the widespread near-surface palladium zones that have been identified to date. The Company has initiated a magnetotelluric (“MT”) survey on the Property. The MT survey is an electromagnetic geophysical method with excellent depth penetration and a proven ability to detect, directly or indirectly, the type of palladium mineralization (high palladium tenor disseminated sulfide) that is found at EBL. Initial results from the completed portions of the survey have delineated several high priority geophysical targets proximal to known palladium rich mineralization. The geophysical program is guided by a previously untested exploration model that is based on observations from the Lac des Iles palladium mine in northwestern Ontario.

The exploration targets at East Bull Lake include:

Rationale for the MT Survey

Quantec Geoscience Ltd. is completing the MT survey on the Property using its proprietary Spartan system. The Spartan system has proven effective on properties with similar geology and palladium-rich disseminated sulfide mineralization. This is best demonstrated by the critical role the 2018/19 Spartan MT survey results played in the discovery of the western extension of the PGM Zone on Impala Canada Ltd.’s and Transition Metals Corp.’s Sunday Lake project, located near Thunder Bay, Ontario (see Transition Metals Corp. news release dated April 29, 2019 for details). 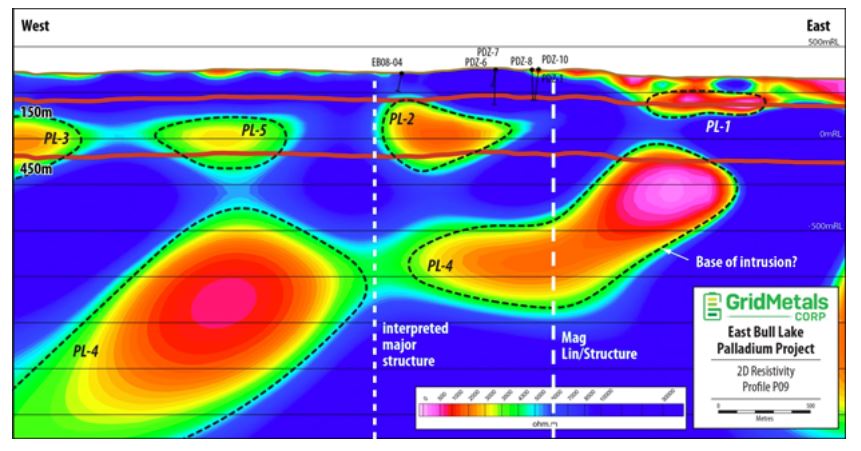 Oblique longitudinal section looking to the north showing a 2D inversion of the MT survey resistivity data. Note the significant strike length (>2 km) of anomaly PL-4, a large resistivity low that is interpreted to adhere to the base of the East Bull Lake intrusion and is apparently associated with two vertical structures. Traces for drill holes located within 100 m of either side of the section plane are shown for reference.